In 1981 I was 10 years old and played with Lego while listening a lot to cassette tapes with TV-2. These were recordings made by my brother Anders G. Frandsen as FOH engineer for the band. It had a huge impact on me following his work for TV-2 from 1981 to approx. 1995 while they grew from being a new band to becoming one of Denmarks biggest bands with big concerts and tours. It was paving the way for me also working with sound and music as a grown up, both in my studio and as an R&D engineer at TC Electronic since 1996.

My brother dies suddenly in 2008 and I inherit some of the tapes. It is not until 2016 during restoration of my own band performances as a drummer that I think that maybe the TV-2 cassette tapes may also have a chance of being optimized using modern technology so they can be enjoyed by more people. Besides really loving the songs I am particularly happy about the energy in these tapes.

The first tape in the collection is from Oct 2nd 1981 and recorded in Holbæk, Denmark. After a few test-optimizations I get in touch with TV-2 and fortunately they agree to continue trying to restore the tape. This initiates a 5.5 years process in the studio - with technological assistance from Los Angeles and meetings with the band in order to reach the goal. The concert is now reborn Jan 1st, 2022, and hopefully it will be received well 40 years after it was played live in Holbæk - and in time with their 40 years anniversary.

A circle is drawn and it has both a huge pleasure and a great challenge to help this concert on its way. I am very grateful that TV-2 has been so obliging and patient in the long process.

Available in your preferred streaming service via 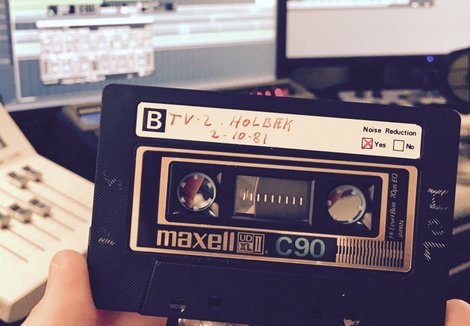 From Maxell to Spotify

The process of restoring the Holbæk concert from 1981 has presented an overwhelming number of challenges, which the circumstances and time of the recording have increased but the technological development since has fortunately diminished.

The Holbæk concert was stored on the cassette tape for 35 years before it was transferred to a computer and while tape can last for many years, it must be under the right conditions. We were lucky that heat, cold, moisture, aging and magnetism had not damaged the tape more than could be restored. It turned out that the original recording was made on a semi-defective tape recorder and it required assistance in the form of a small research-like effort using mathematical tools to find the optimal reconstruction of the sound.

Many bands record their concerts, and in 1981 often on cassette tapes, directly out of the front-of-house mixing console at the concert. Mostly for learning and for registration, but not for publication. The reason is that the mix is ​​intended for live audiences in the room and not for listening at home. Sound directly from musicians on stage to audience, the sound profile of the speakers and sound equipment, reflections and decay in the venue itself and the sound engineer’s focus on the audience means that the audio signal that comes

directly from the mixing console is not optimal for an album. In recent years, technology development has opened a door on the squeeze that it is possible to "re-mix" and adjust the sound sufficiently for a release. All of this is perhaps the biggest reason why one very rarely sees such recordings being released.

In some parts of the concert, Steffen's vocals were so acoustically distorted on the old cassette tape that it could neither be saved nor stand the distance to a release. It was close to putting an end to the project, but after much searching, a possible solution emerged in Los Angeles - a company specializing in cutting vocals out of a stereo recording with surgical precision. They had just developed technology strong enough to remove the original vocals so new vocals could be recorded and mixed in. The new vocals are, as far as possible, based on the energy and feel of the original - with a goal of being true to the times in 1981. Subsequently, the vocals are sound wise adapted and mixed as precisely into the concert as possible.

The preservation of the great energy of the concert has been most important in the process and that was one of the reasons why the idea of ​​a possible release arose at all. Throughout the long process, focus has been to be true to the original concert, the natural feel and true to the intention in 1981.